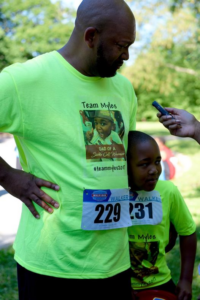 “Myles is ten. He just missed a lot of school this year. He missed a lot of test. He got real behind in school, was almost held back. But he did good on his end of year tests. He got to stay with his class, but right now, he’s in summer school. He has a tutor. He’s taken it all well. Right now, it’s a pre-existing condition. The way it’s gonna go now, who’s gonna cover it? It’s the main reason, like everybody, I stick to the same job: insurance.

Prodigy, the rapper who just died — I remember before he was born, it was T-Boz. It was a big thing. [But] next week, they won’t even think about it. Cause nobody carries the torch. But we live with it. We live with it.” -Karl, father of child with SCD, hgb ss