“I’m a social worker and I’m an advocate. I’ve been working in New York about 30 years as a social worker. In 2006, I moved into working with sickle cell in a hospital with adults, and then after that I worked with pediatric children and I’ve worked on a couple grants.

Now I’m out of the hospital and working for a community agency, SCTPN. For me, I kind of got into sickle cell accidentally. It was somebody I knew and there was a job opening at a place where I worked, and since then I’ve really embraced it as a place of health justice, of underserved need. I could see it’s definitely people living with a chronic health condition that need more help than they’re getting. They need coordinated care and there’s a lot of barriers in the healthcare system and with pain management and emergency rooms. 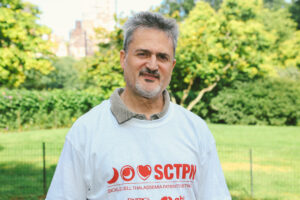 I actually was working in a day hospital that was kind of a unique thing. It was written up nationally as a great model, and then it closed. After 20 years of NIH funding, the grant ended and then that hospital closed the program. So then we had to look for different models of care, help people advocate for themselves.

I ended up transferring to different areas, but still volunteering in sickle cell, working as much as I could with people. We actually were able to bring in a sickle cell panel of patients to present to a social work department, and they were amazed that they were seeing them articulate and advocating for themselves while they were healthy, and they had only known them when they were sick. And they were like, “Wow. I never saw this side,” because if you work in a hospital you only see people when they’re sick. So people don’t see them as whole persons. So it’s so important to be more visible in the community for both public and private funding.

To me, it’s so encouraging to see the younger generation coming up to be advocates today. It’s really amazing to me to see the young people coming out and they’re going to carry it on and carry it forward. The White House and NIH announced a drive to have a cure for sickle cell, which is very possible scientifically as a single-gene deletion with gene therapy. So, I’d like to really see that. Within one generation we can really do a lot of healing.